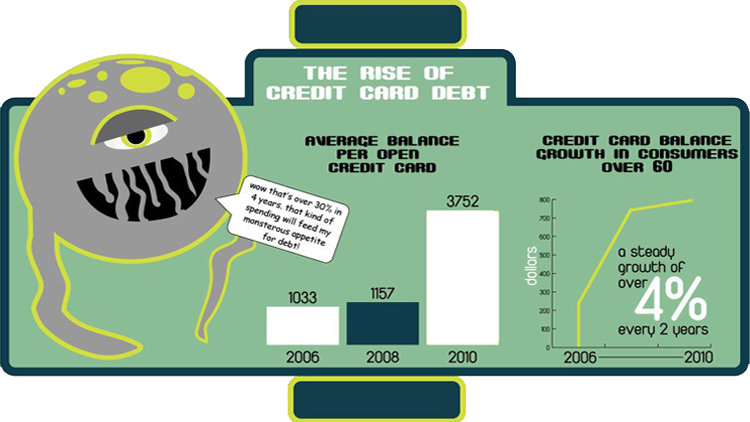 Consider the facts: there is over $852 billion in debt in the United States – and 98% of that debt is credit card debt. One out of every seven people uses 80% of their available credit. Most Americans carry at least three credit cards, with an average APR of 13.67%. 73% of Americans rely on credit cards to meet their needs, yet 81% of those same Americans are afraid to discuss their credit card debt.

Americans have a serious problem with credit card debt and it just keeps growing. In 2006, the average balance per open card was $1,033. By 2011, that amount had grown to over $3,752. Even in consumers over the age of 60, who typically live on a fixed income, credit card use has risen at a rate of 4% over every two years.

Regionally speaking, certain cities and states fare worse when it comes to consumer debt than others. Nevada has the most bankruptcy in the country, followed by Tennessee and Georgia. Miami residents owe approximately 22% of their income, while Tampa has the highest income to debt ratio in the country with 17.1%. Los Angeles, not surprisingly, carries the third-highest debt to income ratio in the nation.

So, will this nightmare ever end? Is there any good news on the horizon?

Well, there has been a 5% decrease each year since 2008 on both 30-day and 60-day delinquencies. Less than half of all credit cards are 30 days late; only three out of 10 are 60 days late, and 77% of loans that are 90 days past due have not been defaulted upon. However, 48% of Americans have less than $10,000 in credit card debt. That’s not too bad, considering how prevalent credit cards are in American society.

If you need help managing your credit card debt, you should consider contacting a non-profit consumer credit counseling service to get back on track.

Learn How We Can Help